How Your Auto Battery Works

Here’s a simple guide to understanding how car batteries work, from the alternator to cold cranking amps to different types of car batteries. Find out:

How a Car Battery Starts a Car

The first purpose of an auto battery is to provide power for starting your vehicle. It also acts as a surge protector for the car's computer and provides power for short-term use of things like lights, stereo, GPS or wipers when the engine is off.

The car battery is part of the starting system. There are three main components in this system: 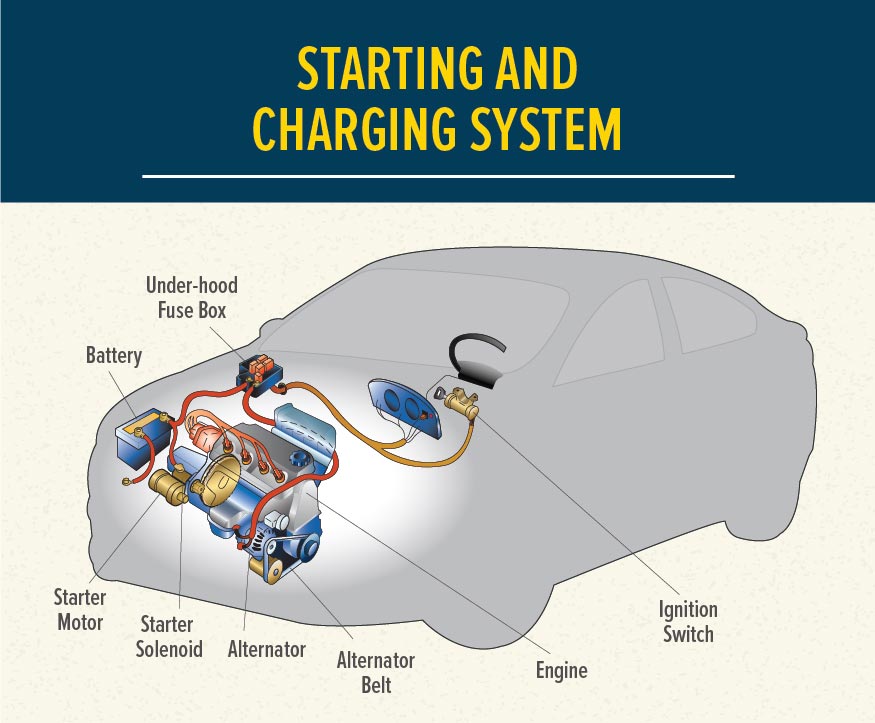 How the Battery Provides Power

The two types of auto batteries — flooded and AGM batteries — use lead-acid technology. A typical lead-acid car battery contains plates of lead alternating with plates made up of other materials, all immersed in an electrolyte solution of about one-third sulfuric acid and two-thirds water.

Turning the ignition triggers the acid in the liquid electrolyte solution to react with the active material on the plates (active material refers to any substance in the battery that reacts with the solution to discharge or recharge the battery). This generates a bigger electrical current. The current travels through the starting system in a chain of reactions that cues the engine to start.

What Are Cold Cranking Amps?

Cold cranking amps (CCA) refers to the amount of power a battery can supply for 30 seconds even at low temperatures. Larger engines require more power to start, as does starting the car for the first time on a cold day.

A high CCA rating is important for standard auto batteries in areas with subzero temperatures, since deeply discharged wet cell batteries can freeze solid in such weather.

How the Car Battery Recharges

The alternator is responsible for recharging your car battery as you drive. This part also supplies power for your car’s electronics when you're underway. It is driven by the alternator belt from the engine. As the belt goes around, it generates electrical current to run your vehicle's electronics. It also sends some current back to the battery to recharge it.

A voltage regulator controls this flow of electricity to keep it even and deliver the right amount of charge to meet needs like running the AC or heater. It also protects the battery from overcharging, which can damage it.

Why Does My Battery Die?

Over the life of a battery, discharge-recharge reactions happen thousands of times. Each cycle wears out the plates a bit, and over time the lead deteriorates. As your car battery loses capacity, cold cranking amps decrease.

Deep discharging, which happens when you use the battery to run the stereo, lights or other electrical systems in your car when the engine is off, is responsible for a good portion of battery failures. Discharging most of your battery's capacity by using it in this manner for too long and then recharging it through driving can cause the sulfur in the electrolyte solution to stick to the lead and create other damage to the plates in the battery.

What Are the Different Types of Auto Battery?

The two most common auto batteries for sale today are standard wet cell batteries and absorbed glass mat (AGM) batteries. Both use lead-acid technology. The differences are in the needs of the car.

These are also called flooded, conventional or SLI (starting, lights, ignition) batteries. Some standard batteries have vents that allow for airing out corrosive gases, steam, and condensation (these may be called vented batteries). They have removable caps for adding fluid. Other wet cell batteries are closed systems, with no removable caps.

These are a type of VRLA battery, which stands for valve-regulated lead-acid. They’re sometimes called regulated valve, dry cell, non-spillable or sealed batteries. They are called sealed because they have no removable caps, don’t vent gases and can’t leak any acid. They do have pressure-activated relief valves that open only if the battery overheats during recharging.

Some newer cars, such as those with start-stop technology, require AGM batteries. These batteries will continue to deliver power to a car’s computer and electronics even when the engine isn’t running.

AGM batteries hold a charge longer than standard wet cell batteries. They can tolerate periods of disuse and repeated deep discharging and recharging cycles better than flooded batteries. They have a short recharge period but they can be easily damaged by overcharging. They also perform well in harsh climates with extreme heat or cold.

Wet cell batteries and AGM batteries are not interchangeable — your car requires one or the other.