Driving in Rain? How to Avoid Hydroplaning and Other Tips

The most dangerous rainy driving conditions are during a downpour, right? Nope. It’s actually the most risky during the first 10 minutes of a light rain.

There’s always some engine oil and grease buildup on paved roads, which will float on water. Any time it rains, road surfaces will be slick, but especially so at the beginning of a rain shower before some of the oily residue is washed away. Rainy conditions can actually be as slippery as driving on ice.

Be especially aware during the first rain after a dry summer (when oil has been collecting on the asphalt for a long time) and the first few hours of a fresh rain. Follow these driving tips. 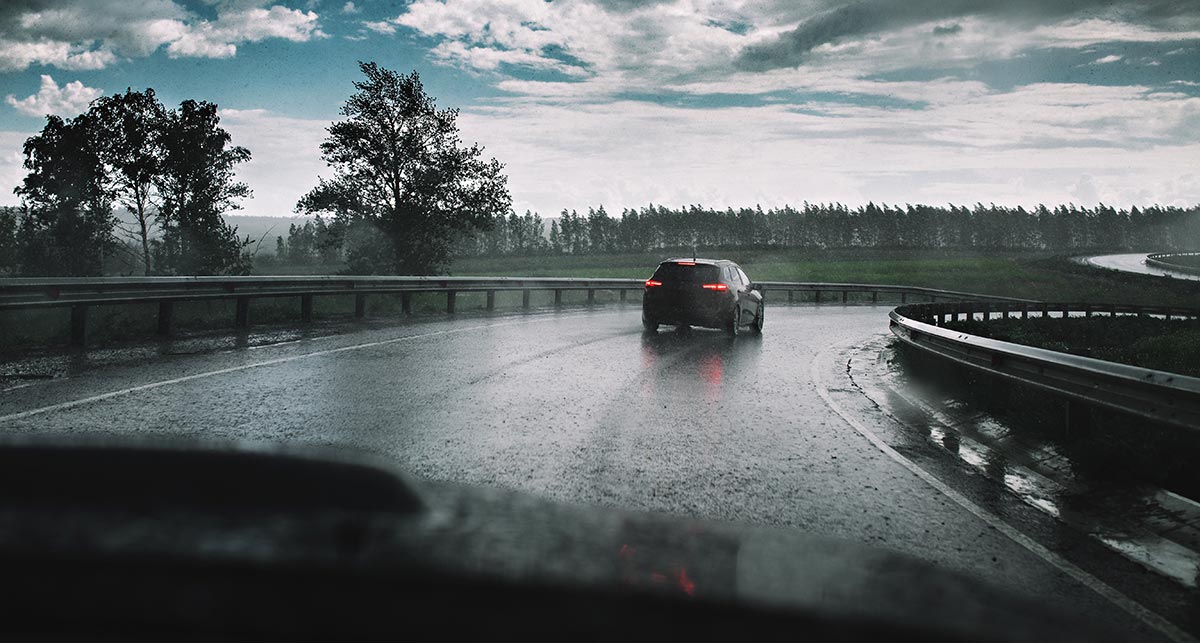 Hydroplaning is when your tires lose contact with the road and start rolling on top of a thin film of water. It can happen any time a tire can't channel away water fast enough to maintain proper contact with the road. It’s not just driving through standing water that puts you at risk. When it’s raining heavily or you’re driving on worn tread, it’s also risky.

When tire tread is in good condition, the grooves do the job of giving water on the road a place to go and ejecting it as the tire rolls. Assuming you’re driving at a safe speed, you’ll have plenty of rubber in contact with the asphalt to keep enough traction.

But when tread depth is shallow because the tire is worn, the grooves aren’t as deep. Less water gets scattered by the grooves, and the vehicle may start to hydroplane. It can also happen if you’re driving too fast for the conditions, even if your tires are in good shape.

Behind the wheel, hydroplaning feels like the vehicle is floating or veering in a direction on its own. When this happens you’ve lost braking and steering control.


What to Do If You Hydroplane

It may be against your instincts, but the right response to getting out of a hydroplane skid is to immediately take your foot off the gas and wait it out. Do not brake or try to steer. Most hydroplane-related skids last for just a split second before your vehicle regains traction.

If you do brake when you start to roll on water, ease up on the brake until it’s over. If you drive a manual transmission, disengage the clutch as well.

Don’t slam on the brakes or yank the steering wheel since it could cause you to lose further control. It’s best to wait to brake until you're out of the skid.

If you have to brake to avoid crashing and have anti-lock brakes, brake normally. If your vehicle doesn’t have ABS, pump the brakes lightly. Gently steer in the direction you want the vehicle to go. You may need to correct the car’s course with very slight steering wheel movements a few times as you’re regaining traction, but don’t oversteer. All this happens in a matter of seconds or less.


Don’t Be a Statistic

According to the Federal Highway Administration, most weather-related auto crashes occur on wet pavement and during rainfall. Annually, 3,400 people are killed and more than 357,300 people are injured in crashes when it’s raining.

Maintaining your tires and driving with extra care when it rains can help keep you from hydroplaning and get you where you’re going safely.

Dealing with other hazardous conditions, like fog? Check out our article on driving in low visibility.

Important Notice: The information provided above is of a general nature gathered from a variety of resources deemed reasonably reliable. The operation of your vehicle, or the repair or replacement of your vehicle’s equipment, may be different than for a typical vehicle. Please consult your owner’s manual for specific warnings, notices, and other advice relative to the subjects addressed herein.