WE’RE HERE TO HELP
Our stores remain open where we can and are taking extra precautions to help keep those who provide essential services moving safely. Learn more

Are Nitrogen-Filled Tires Worth the Cost?

The main benefit of nitrogen-filled tires is that the loss of tire pressure is slower, because the gas in the tire escapes more slowly than air does. With more stable tire pressure, the thinking goes, you’ll get better gas mileage and get full tire life since you’re always rolling on fully inflated tires.

Claims are also made that nitrogen in tires prevents tire “rot” by limiting the moisture that naturally occurs inside tires and heads off corrosion of the wheel that can be caused by contact with moisture.

These claims are overstated. The advantages of tires filled with nitrogen, instead of plain ol’ air, aren’t big enough to justify the price tag or the inconvenience. On new car tires, the cost can range from $70 to as much as $179. On existing tires, you’ll pay up to $30 per tire for service to drain air and refill with N2. Refills will run you $5 to $7 per tire, which you can expect to do less often than with air-filled tires. But you’ll still need topping off every two or three months.


The Science of Putting Nitrogen in Tires

Small amounts of air naturally leak out of tires over time, especially when tires are subject to large temperature swings. This is because the walls of tires are slightly porous. When a tire gets hot the air inside it expands. The added pressure pushes minute quantities of air out through the pores, so you occasionally have to get your air topped off even if your tire doesn’t have a hole.

Promoters of nitrogen tires point out they don’t lose tire pressure as fast as air-filled tires. Since nitrogen molecules are bigger than normal air molecules, it is harder for them to leak out. This means a tire filled with nitrogen will maintain air pressure longer. Therefore, they say, you’ll roll on tires that are always properly inflated, resulting in better fuel economy and longer tire life.

A normal tire filled with regular air loses an average 1 to 2 PSI (pounds per square inch) per month. It’s true that there is a slower loss from nitrogen-filled tires. But this improvement is slight — only about 1.3 PSI less over the course of an entire year, according to Consumer Reports. It’s not enough to make a true difference in gas mileage or tire wear for people driving passenger vehicles.

This is partly because air is already made up of 78 percent nitrogen and just under 21 percent oxygen, with the rest a mix of water vapor, carbon dioxide and other gases. When tires are filled from a nitrogen air pump this ups the percentage of N2 to between 93 and 95 percent. It’s never 100 percent.

Bottom line: Nitrogen will slow the amount of tire inflation loss to about one-third of what you’ll experience with air. This means instead of losing one to two PSI per month, you’ll lose ⅓ to ⅔ PSI per month. You’ll still need to check and top off your air roughly every other month to stay within the ideal inflation range. And you’ll spend far more than you’ll save on gas and tire tread life. You’re better off making simple tire maintenance part of your routine.

There are more cons than pros for changing to N2 tires. For example, nitrogen filling tanks aren’t easily accessible like air compressor tanks. You’ll have to plan for refills in places that may be few and far between. This can cost you time and money. Here’s all the info.

Q. How much will it cost to get nitrogen in my tires?

A. For fills of new tires, between $70 to about $175 at some outlets. Drains of air and refills with nitrogen on current tires, up to $30 per tire. Topping off can be between $5 and $7 per tire. If you want to keep your tires within 1 PSI of the ideal, you’ll likely be topping off at least four times a year, probably more. This could be between $80 and $112 a year, and possibly a whole lot more. Compare this to paying nothing at all for regular air at a tire store, or around a buck per fill at a service station.

Q. Are they safe?

A. They’re as safe as regular tires. Nitrogen isn’t flammable and won’t cause your tires to explode.

Q. Will I get better gas mileage?

A. You’ll always get better fuel economy on properly inflated tires, whether they’re filled with nitrogen or air. Under-inflated tires can lower gas mileage by about 0.2% for every 1 PSI drop in the average pressure of all tires. They’ll also wear faster and be more prone to failure. The most economical way to make sure you’re driving on well-inflated tires is to just check your tire pressure once a month or get it done by a technician (free at good tire stores).

A. Nitrogen is a “dry” gas compared to oxygen (which makes up about one-fifth of regular air). Nitrogen-filled tires don’t generate as much moisture inside when tires expand from heat friction then contract when they cool.

However, rubber rot from moisture inside the tires of passenger vehicles is very unusual. Unless your tires are on a vehicle that’s rarely driven, it’s far more likely your tire tread will wear out before the small amount of moisture inside an air-filled tire degrades the rubber.

And today’s alloy wheels are coated to prevent corrosion on steel parts — the belts, beads and sidewall buttressing — that may come into contact with water, so that’s not a typical problem.

Q. Can nitrogen tires be filled with air?

A. Yes. It’s unsafe to drive around on under-inflated tires, so don’t hold off thinking you need to wait to top off until you can get to a filling tank. It’s perfectly fine to add air and just get your next fill with nitrogen.

Q. Do they run cooler?

A. There’s no significant difference between air-filled and nitrogen-filled tires in terms of running temperature.

Q. Where can I fill my tires?

A. Use this nitrogen dealer locator, but be aware that some filling stations require you to have purchased tires with them, or have a membership.

Q. Will I have a better ride?

A. There’s no difference in handling or ride quality between tires filled with air or nitrogen, so long as they’re kept properly inflated.

Q. How can I tell if I have nitrogen in my tires?

A. The tire valve stem will have a green plastic cap or a cap topped with a green indicator. 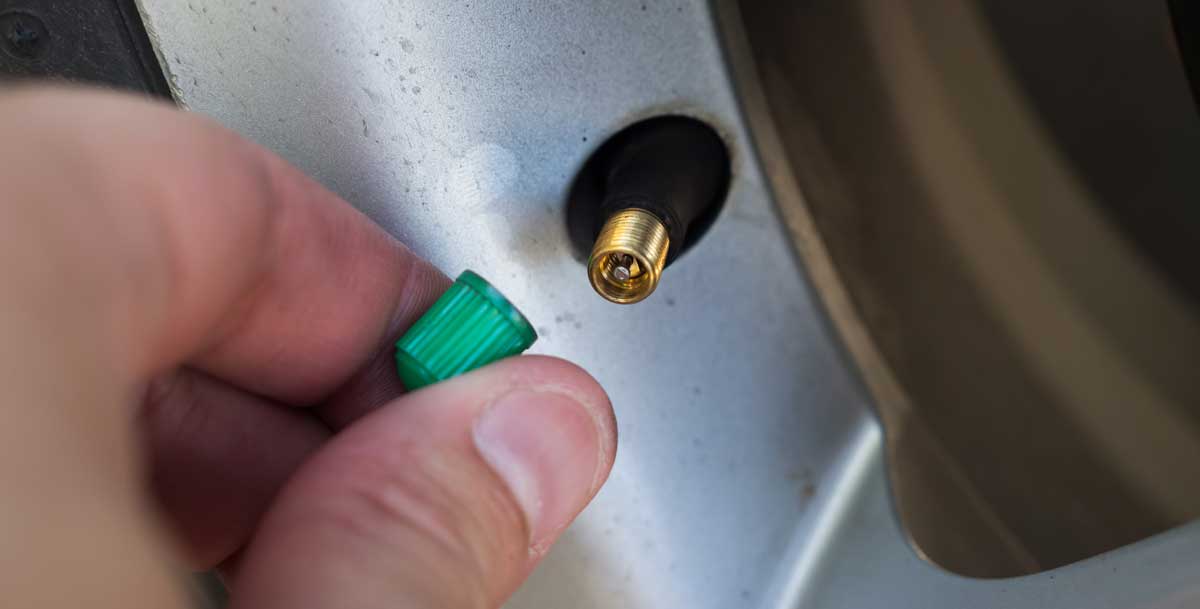 Q. How do tires get filled with nitrogen for the first time?

A. The tire is purged of air and filled with nitrogen several times using a machine, which takes out most of the oxygen along with any water.