What are Directional Tires?

Directional tires have a tread pattern designed to rotate in only one direction. When you look at such tires head on, the lateral voids and channels on the tread all point forward and down. The channels on both sides of the tread will run like two waterfalls joining from opposite sides, like this: ϒ

Directional tires (also called unidirectional) are better for performance cars — and traveling at high speeds — than tires with symmetrical or asymmetrical tread patterns. The tires channel water away efficiently for excellent hydroplaning resistance and deliver sporty performance on dry surfaces.

But directional tires cannot be easily rotated to as many positions on the vehicle. In order to rotate directionals to opposite sides of a vehicle — not just between front and back on the same side — the tires have to be dismounted from the wheels and remounted before being installed.

For this reason, most drivers end up just switching directional tires from front to back on the same side when they get a rotation. This means the tires will wear less evenly and more quickly, and that’s why you may get less mileage.


How to Identify Directional Tires

Most directional tires have a solid center rib, which adds rigidity for high-speed stability. Also, the lateral channels on the tread pattern all point down in a V-shape. Such designs are used on summer or winter tires.

Here’s a comparison between directional, symmetrical and asymmetrical treads. 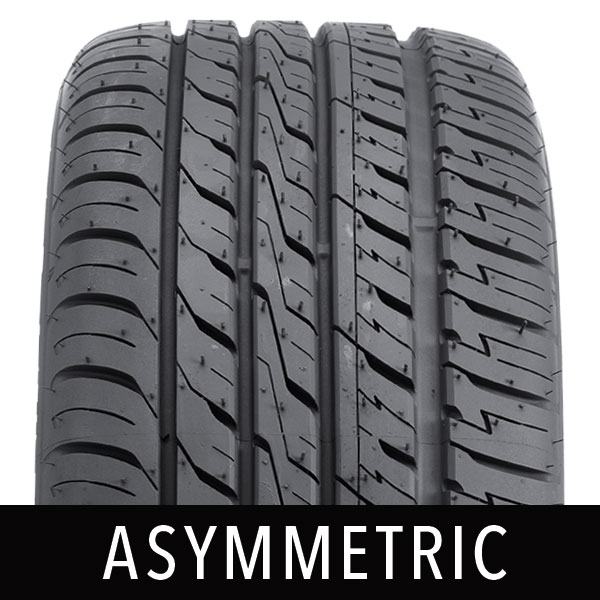 The most common tread pattern for passenger cars is symmetric. The left and right tread blocks mirror each other, and the grooves and voids point in multiple directions. Both summer and winter tires use this type of pattern.

Asymmetric treads combine the above two patterns to offer good grip on dry, wet or snowy roads, making the tread type a better choice for all-season use. The inner side of asymmetric tires often features lateral voids like those found in directionals, while the outer side uses larger tread blocks.

On directional tires, there’s an arrow on the sidewall of the tires — when correctly mounted, the arrow points toward the front of the vehicle. If directional tires get mounted backward, you won’t get the hydroplaning resistance and other performance driving benefits the tread is designed for.

Front and rear tires often wear at different rates. It is recommended to rotate standard tires between front and back and crossways to maximize lifetime mileage.

When you have directional tires, you can only easily swap fronts for rears on the same side of the car. If you want to cross tires to opposite sides, you’ll have to go through the time and expense of having the tires taken off the wheels, flipped, remounted on the wheels and swapped.

Directional tires provide superior handling in wet conditions or dry. The V-shaped tread allows water to be pushed outward as the tire rotates, evacuating water better than a symmetric tire.

The tires handle better at high speeds. Most race and sports cars run with directional tires.

Directionals can also provide better fuel efficiency since they have less rolling resistance. (But if you’re a spirited driver, faster accelerations and speeds may offset these gains.)

Also, directionals typically have shorter tread life. It’s not because the tread is less durable, but rather it’s because tire rotations involve extra labor and cost. Many drivers opt to swap front and rear tires on the same side to avoid the hassle.